Athena was a moderately powerful winter storm, bringing a large amount of snow to Ohio.

On November 30, 2021 the remnants of Hurricane Zeta slowly traveled through the Gulf Coast transitioning into a cold core low. The low moved up into Kentucky merging with another low early on December 4. The combined low became known as Winter Storm Athena. Athena deepened to a 967 millibar low equivalent to a Category 2 hurricane. It brought anywhere between 3 inches to a foot and a half of snow in Ohio on December 7. It was slow to move out of the region. Finally on December 11 it moved into Canada and became colder. The system became a polar low as it transitioned. The system gradually weakened before dissipating completely on December 17 near Hudson Bay. 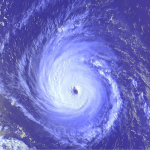